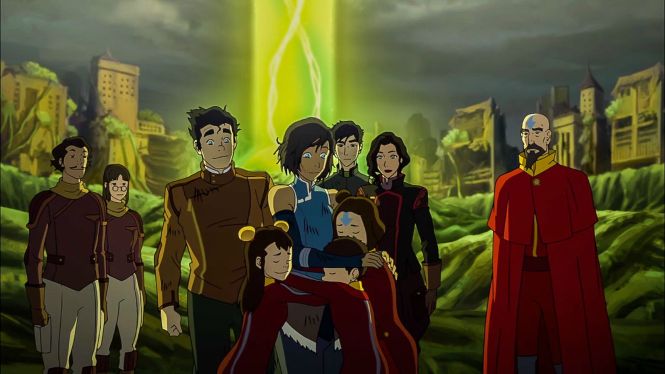 The Legend of Korra was legen– wait for it– dary! I’ve been holding that pun back all season. This series always had strong finales and this being the last one was no different. While writing this review every other sentence included “I like,” it’s tough writing a review when I only have positive things to say, it gets a tad redundant.

I never thought Legend of Korra would come close to eliciting the emotions I felt during The Last Airbender, but I was wrong. Dead wrong. It took longer for me to fall in love with the characters, but the strong final 2 seasons got me there. I’m less upset about the show ending than I thought I would be because every character had an ending that I was satisfied with. The only thing that bugged me was that Team Avatar didn’t really have a true reunion or send off in the end. As much as I love the Korrasami ending I feel like they emphasized that relationship over the rest of Korra’s friendships. The cast is adorable, did you see this video? The whole gang deserved to finish the series together. Otherwise I loved everything about this episode.

END_OF_DOCUMENT_TOKEN_TO_BE_REPLACED

This is the last episode before the series finale… I think every soldier in Kuvira’s army has the same weird haircut and it sort of freaks me out. I’m not sure what the standard female haircut would be because Kuvira may be the only female in her army. Kuvira insists that the 2 of them will get married after the war is over, but I don’t notice an engagement ring on her finger. I think she loves Baatar Jr., but she loves winning more, and takes advantage of Baatar Jr.’s love for her. Maybe I’m just a helpless romantic, but I hope they really do get married after the war is over.

END_OF_DOCUMENT_TOKEN_TO_BE_REPLACED

My procrastination has gotten so bad that the next Legend of Korra episode has already come out before I posted this review. My writing process is me watching the episode and writing down my thoughts, then going back and editing it later. I handle this show differently than Game of Thrones and Flash by trying to review the episode more than recaping it. I wrote and edited things before I saw the new episode and now things are a little redundant. I’ll use parentheses when interjecting with my future voice and I’ll leave everything else untouched. Hopefully this won’t be too confusing and I’ll get back to schedule before the finale.
END_OF_DOCUMENT_TOKEN_TO_BE_REPLACED

I think Napoleon Dynamite airbender was given this tour guide role because he failed at everything else. He has a very supportive and positive mother, but wow, the rest of the tour group consists of dimwits…most people in tour groups are pretty dull.  Even Napoleon Dynamite knew not to poke the dangerous vine with a stick.

Spirit vine logic, attack innocent people in Republic City instead of the guilty people cutting them down in the swamp. After re-watching the episode I noticed during Korra’s vine trance that sprit vines do attack mecha suits, but aren’t strong enough to stop them. Spirit vine logic 2, if you can’t beat the bully, just pick a weaker opponent.
END_OF_DOCUMENT_TOKEN_TO_BE_REPLACED

A title can give away a lot of information; Korra Alone was everything I expected it to be. This episode focuses entirely around Korra and explains through flashbacks how she ended up fighting in some random underground arena. The surprise reveal at the end of the episode reunites the Avatar with Toph and puts the cherry on top of a great episode. I thought with the Beifong family playing such a large role in the plot last season we would have seen her then, but reintroducing her now is much better. In Last Airbender Toph is introduced as an illusion in a swamp. I’m not sure if this is the same swamp, but there’s a connection here regardless. When the Avatar has been confused and unsure what they should do the spirits bring them to Toph Beifong in both lifetimes. Sokka is now the last of the original Team Avatar that Korra hasn’t reconnected with, but I don’t think we’re going to see him anytime soon. If he didn’t show up in the last couple seasons then I feel like Sokka is probably chilling with Aang in the afterlife. He wasn’t very spiritual either so I’d rule out meeting him via the spirit world. Meeting Toph at this point makes sense and I don’t think the writers will shoehorn Sokka in the last season, but how crazy would it be if Azula came back? That would blow my mind.
END_OF_DOCUMENT_TOKEN_TO_BE_REPLACED

Well that was fast. After a great Season 3, the final season of LoK starts after a brief two-month hiatus; in their universe however, 3 years have passed. Despite the 3-year time skip, this season feels more connected to the story than the previous seasons. Season 1 of LoK could stand alone, Season 2 had some closure, but Season 3 left on a sour note. If anything, Season 4 feels like Season 3 part two, which is awesome because Season 3 was my favorite season. I want to talk about what I took away from the first episode, how it relates to past themes, and what I expect to see in the future.
There multiple themes that carry over from last season.
END_OF_DOCUMENT_TOKEN_TO_BE_REPLACED